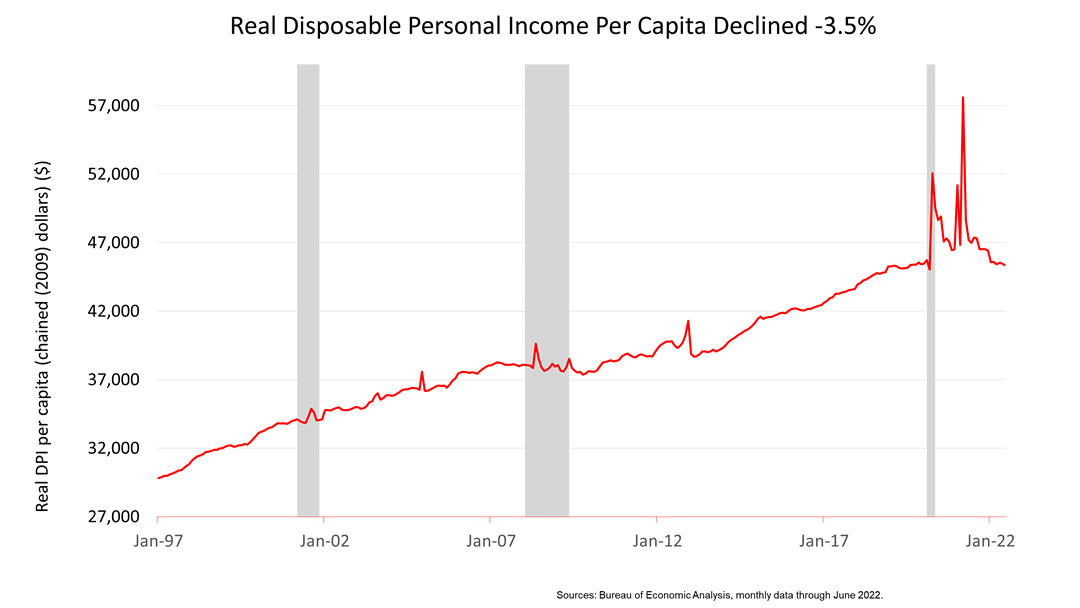 Real disposable personal income (DPI) per capita in the United States declined from $46,985 to $45,356 in the past 12 months, according to data released today by the U.S. Bureau of Labor Statistics. Consumer buying power shrunk by -3.5%. 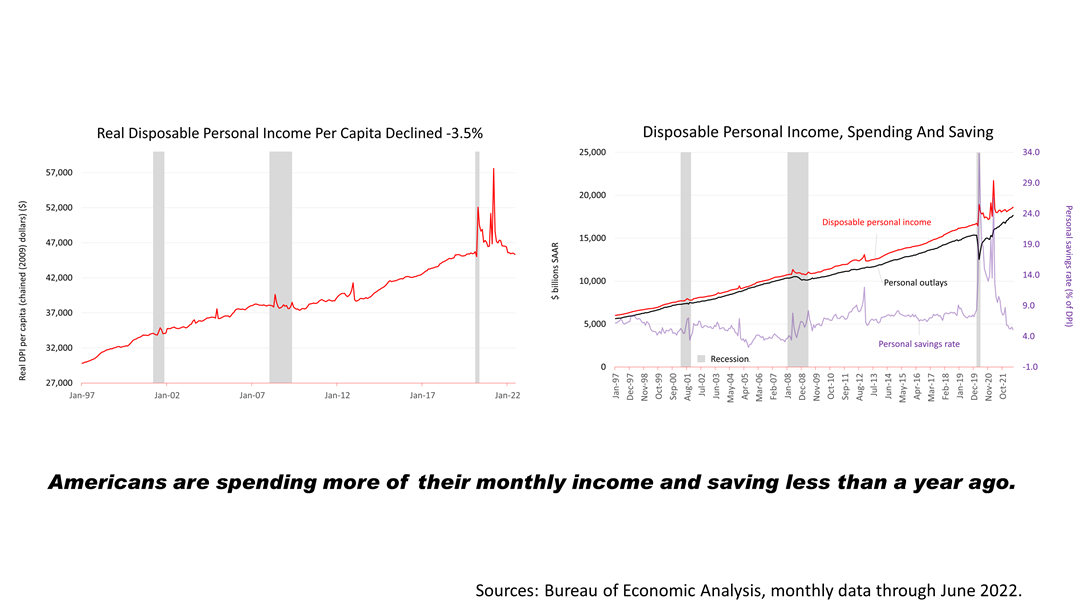 Here’s the breakdown of income and spending, crucial factors in the consumer driven economy of the U.S: Disposable personal income was up +3.3% compared to June 2021 – before adjusting for inflation.

Inflation, as measured by the Personal Consumption Expenditure Deflator (PCED), soared +6.8% in the same 12 months, leading to the shrinking buying power.

Personal outlays rose +8.4%, largely because of inflation, while the savings rate, at +5.1%, in the same 12-month period, fell below its pre-Covid level.

It means Americans are using an increasing amount of their monthly income and saving less to cover monthly expenses, which have risen because of inflation. 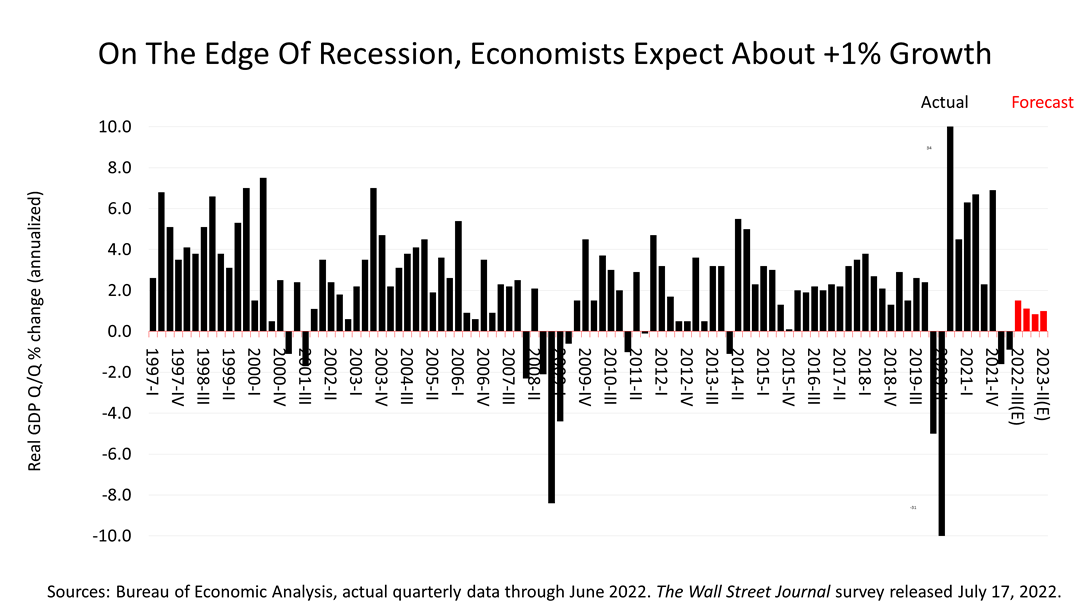 On Thursday, the Bureau of Economic Analysis reported that the economy shrank by nine-tenths of 1% in the second quarter of 2022. The number will be revised twice before the final figure is published in a month. The decline in the second quarter followed a decline of -1.6% in the first quarter. Still, the forecast from leading economists surveyed on July 17 by The Wall Street Journal is for about +1% growth for the four quarters through the end of 3Q 2023. 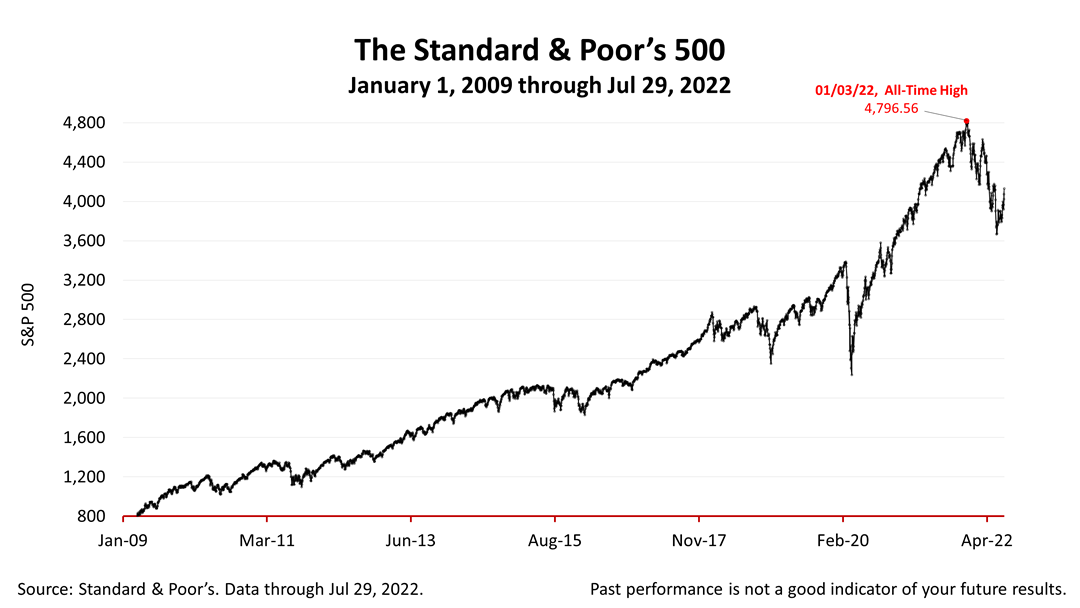 The stock market discounted the bad economic news and may already have bottomed in anticipation of the growth forecast.

​The Standard & Poor's 500 (S&P 500) is an unmanaged group of securities considered to be representative of the stock market in general. It is a market-value weighted index with each stock's weight proportionate to its market value. Index returns do not include fees or expenses. Investing involves risk, including the loss of principal, and past performance is no guarantee of future results. The investment return and principal value of an investment will fluctuate so that an investor's shares, when redeemed, may be worth more or less than their original cost. Current performance may be lower or higher than the performance quoted.   ​​​​​​​​

Amid 2Q '22 Turmoil, Fed’s Robo-Economist Forecast...
A Long-Term Perspective Amid The Bear Market Of 20...