If you’re feeling stressed about inflation, the War in Ukraine, Covid-19 subvariants, you’re not alone. 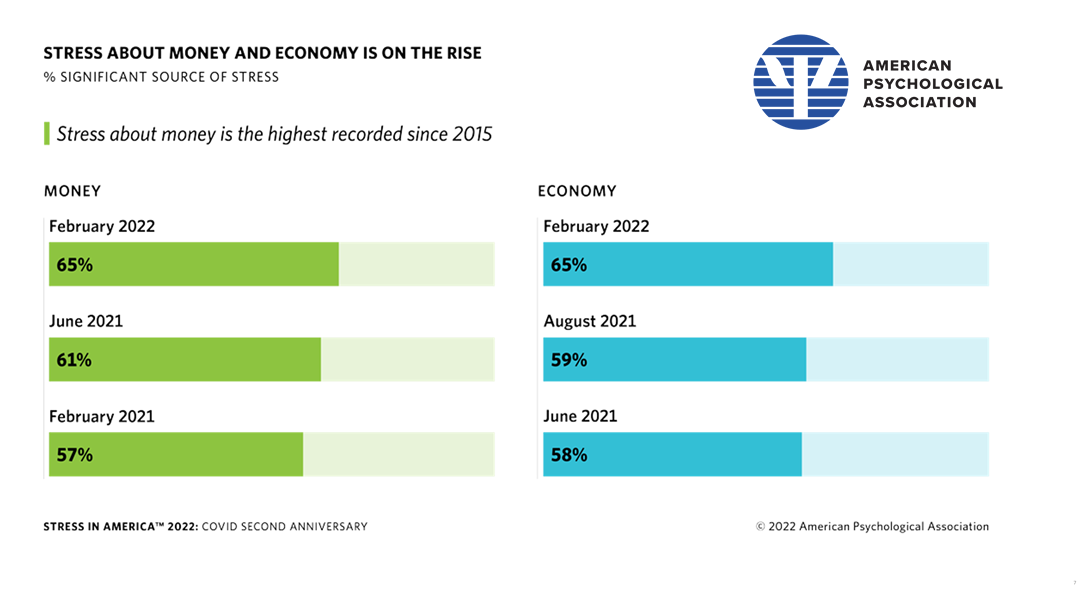 “Amid historic inflation spike and geopolitical strife, money and economic stress is mounting,” according to the latest results of a poll by the American Psychological Association (APA) and The Harris Poll. “These more recent findings were alarming,” according to APA. “Stress about money is the highest recorded since 2015.”

More adults rate inflation and issues related to the invasion of Ukraine as stressors than any other issue asked about since the Stress in AmericaTM survey began in 2007. Top sources of stress cited by those surveyed were rising gas, energy, grocery, and everyday expenses, followed by supply chain issues and global uncertainty.

Investing is an emotional experience as well as financial. Even if you objectively know you have more than enough money to last the rest of your life, times of high-anxiety can test your ability to tolerate risk and stick with your long term plan.

Even if you are not a good fit as a client, as a trusted source of financial, tax, and investment planning solutions, it would be a privilege to point you to a resource  that might be able to help you, if you’re feeling stressed over the economy and your personal financial situation. We’re here to help.

The Federal Reserve raised lending rates by a half-point on May 4 and plans two more half-point rate hikes this summer, on June 15 and July 27 and may impose yet another half-point hike on September 21.  The Fed’s power to change rates is a blunt instrument, a crude rudder on the world’s largest economic system. So, the Fed historically raises lending rates in quarter-point increments.

By stacking half-point hikes one after another, the Fed is hoping to convince consumers inflation will not become a long-term problem.  But will the Fed raise rates too much and tip the economy into recession?

The latest data on the economy indicate that the Fed just might be able to engineer a soft landing in which it would hike lending rates just enough to slow economic growth but not so much that it causes the economy to shrink.

New-job formation in May was better than expected. Even after the Fed announced that it planned a series of half point hikes, business created more new jobs than predicted.  The latest inflation data showed that inflation slowed for the first time in about 18 months.

Meanwhile, purchasing activity at large service sector companies declined in May.  The service sector accounts for 89% of U.S. economic growth and it was boiling hot at the end of 2021 but has now declined to a level in line with its historic norm. The data give reason to believe that the Fed could indeed stamp out inflation without causing a recession, but it’s far from clear.

The pandemic has made America’s labor force smaller. People around retirement age – age 62 to 70 -- left the workforce during the pandemic, according to data from independent economist Fritz Meyer, and many are unlikely to return to work. Fewer workers puts pressure on wages and could result in a wage-price spiral in which inflation expectations lead to demand for higher wages, which drives up labor costs and prices.

With the series of rate hikes coming up, economic and stock market uncertainty and a long, hot summer are in the forecast. In this period of high anxiety